Money does not grow on trees. In what will be called the New Amsterdam Region and the Montauk Region, taxes are currently high due to New York State taxes and unfunded state mandates create high property taxes. This pushes high paying jobs out of NYS. All regions would gain under the three region plan.
Wouldn't it be great if local property taxes were lower and each region decided its own rules and laws.  The regional boundaries are drawn to allow all three regions to be self-supporting.  Each region could go its own ways and no longer interfere with each other. All regions would no longer have to wait for Albany to act.
The transfer of state departments/agencies/employees to regional departments/agencies/employees is explained in detail in the amendment, and the pension system remains at the state level unchanged. The New York & Montauk Regions would still pay for their residents attending New Amsterdam’s regional colleges, and vice versa. Some prisons in the New Amsterdam Region will be owned by the New York or the Montauk Region. Local governments’ ownership rights are not affected by this amendment, so the City of New York retains ownership of its water system.
​     See charts below for details. The token state government would only receive a 3% Sales tax; the rest of the taxing power switches to the 3 regions.
The three region plan is defined here
Under the Autonomous Region Plan, New York City would be called the New York Region. This region also stands to benefit from the Autonomous Regions plan in several ways
Wouldn’t it be great if NYC could repair their own subways without waiting on Albany to act? Wouldn’t it be good for local residents to have a say in their school system?
It would be great if each region's residents had the power and put a STOP to the games being played with the public school system that their children attend. Oh, don’t you know your reps send their kids to private school?
By being freed of the self interest driven system in Albany, all three regions could hold their own elected officials accountable!
The charts here illuminate projected improved conditions based on the elimination of several mandates, taxes and economic proposals when the Autonomous Regions Plan becomes a reality.
​ 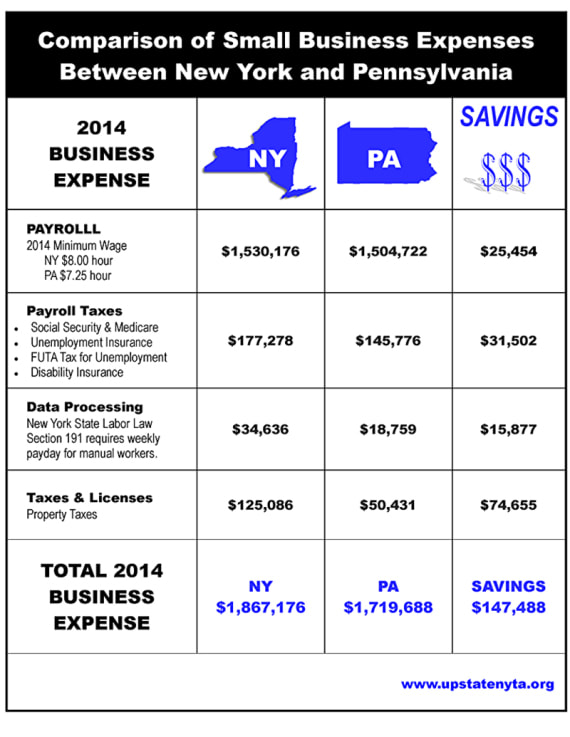 The chart above, labelled “ Comparative of Small Business Expenses”, illustrates some possibilities when the New Amsterdam  and Montauk Regions are created. An option is to model regional governments and their policies based on the success of neighboring states like Pennsylvania or Vermont, in accordance with the values of people living in those regions.
​The chart below, labelled “Cost of Living Comparisons", shows how the New York Region  would benefit by retaining its own tax dollars with the authority to allocate them where needed. 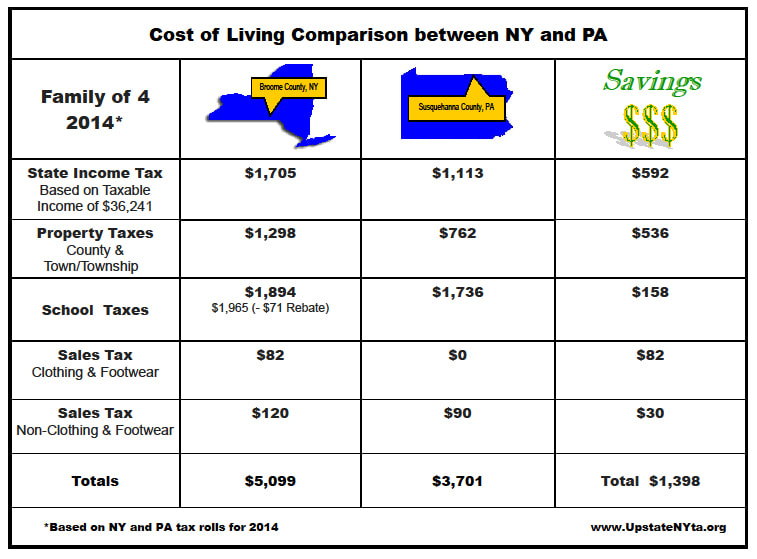 Go to the  www.upstatenyta.org/  for more charts and information

General Financial Information
Congress is unlikely, in the foreseeable future, to give the Northeast the two more US Senate seats a new state would require. Since we are splitting the State of New York into three (3) autonomous regions it should be easier to achieve and work better than two (2) states. Because by forming 3 Regions not a new state or moving counties between states; Congress can be legally bypassed. All that is needed is an amendment to the NY state Constitution.

Also, this helps because each of the 3 regions financially because the state pension system remains at the token state level unchanged. The state token government is kept small by limiting its taxing power to a three (3) percent sales tax.
All other taxing power is transferred to the regions. Local government and school districts would be freed from state level unfunded mandates which increase local property taxes placing undue burden on local residents and districts.

The regional boundaries being placed where they are in the plan and paying income tax in the region where you reside address the financial concerns of the 2014 RIT and the 2015 Rockefeller College studies the questioned whether separate states could support themselves but they drew the boundaries differently. The colleges’ studies also did not address unfunded mandates that keep taxes high and lacked a token state government in their plans; that the autonomous regions plan allows.

About 15 years ago, before over-regulation destroyed most of the upstate economy. Upstate used to pay more of the state taxes than downstate; now downstate must send money upstate to support the region. Under the autonomous regions plan each of the three regions would be able to support themselves, and not need aid from any other region.

During SFY 2018-2019, the NYS tax department collected $73.6 billion from state-imposed taxes and fees as follows:

﻿   In order to support our plan two completely autonomous regions, with a token state government. Ask your county board of supervisors or county legislators to pass the following resolution. Also ask your Town/City/Village leaders to pass the resolution as well. Click button below for details.
Details on what you can do to help
Donate
Divide NYS Caucus Inc is a statewide group working on dividing NYS into autonomous regions

Please enter these two emails into your contacts so our messages do NOT go to your SPAM folder
Divide_nys@newamsterdamny.org and capitalchapterupstate@aol.com