In 1993, over 65% of Staten Island's citizens voted, in a nonbinding referendum, to leave NYC and form their own city. However NYS Legislature has never ratified the 1993 vote. if the people living in Staten Island, Brooklyn or Queens still wish form their own city. We would support a new binding vote that needs no action by the Legislature to take effect; for any of those boroughs/counties.
Step by Step Plan 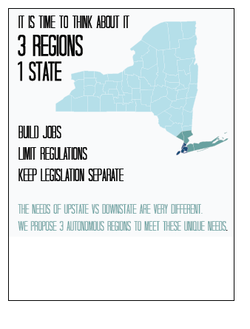 Please enter these two emails into your contacts so our messages do NOT go to your SPAM folder
Divide_nys@newamsterdamny.org and capitalchapterupstate@aol.com